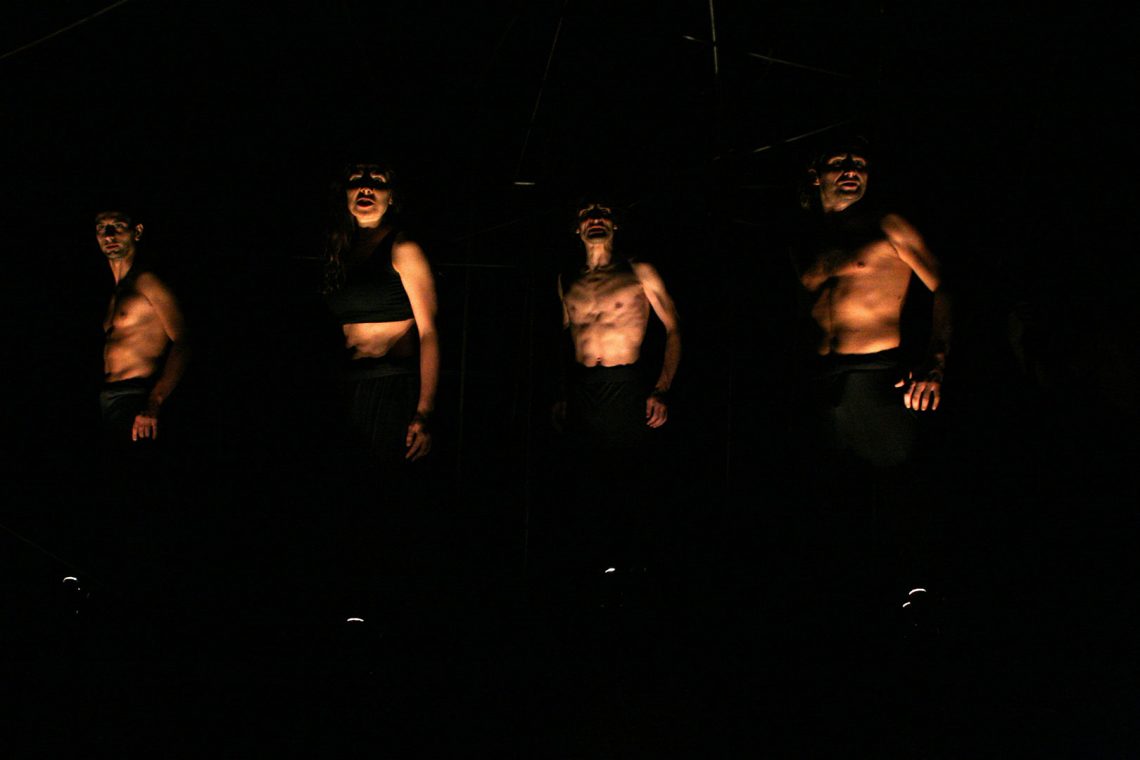 Euridice’s Cry, directed and written by Şahika Tekand based on Antigone (Sophocles) and several other plays, has been put together in order to be staged by the Studio Players as the third and the last play of “Oedipus trilogy”. The first two tragedies of the trilogy are Where is Oedipus? (2002) and Oedipus in Exile (2004), both of which are re-written and directed by Şahika Tekand based on Sophocles’s tragedies (Oedipus Rex, and Oedipus in Colonus).

Euridice’s Cry is written and designed by putting emphasis on concepts of “the rights of the ‘other'”, “freedom of thought, expression, belief”, “the just implementation of law”, “ethnic clashes”, “civil wars”. The main action in the play is based on a matrix which is formed by the realization of a series of consecutive and selected movements in a constraining system.

The Antigone story raises a question in itself. Antigone’s two brothers leading opposite sides in Thebes’ civil war have both been killed in an unjust battle. Creon, new ruler of Thebes, has declared that Eteocles will be honored and Polyneices disgraced. The rebel brother’s body will not be sanctified by holy rites, and it will lay unburied to be the food of carrion animals. Antigone wants to bury Polyneices’ body, in defiance of Creon’s edict. The main question that the individuals -who are forced to take an attitude on the clash between existing laws and ethical principles- must answer and solve becomes the core story and main action of the performance on stage, by the matrix.

This matrix constitutes the structure of a game that takes place for real on stage with the players’ movements. The matrix makes the judgment and decision process of the majority -who is responsible for making a decision about the action which Antigone has committed and also who is responsible for assuming an attitude about the rights of “the minority”, “the opponent”, “the other”- a part of a real and mandatory transformation process, which takes place actually at the moment, both in terms of the stage and auditorium.

For the player, all of the risks on stage are for real as they were on the previous plays. The players are directed by light. In this play, the players are also subject to an obligation which works by hinging on the game rule that comes about through the relationship among the restrictiveness and order of the movement system and the key words.

Limited number of movements are the tools chosen to express contemporary human being’s deception of individual independence. The human being who has been persuaded to be an independent individual, is obligated to live a certain way by the system, or he lives with prejudices, fears and with limited conventional behavior given to him.

With the obligatory movements that must take place on stage and the key words that will offer a solution to be possible and with a real gamely order/game rules which will put the relationship of these two in order, the stage turns into a simulation area and the performance of the player becomes as real as the performance of a rope acrobat who doesn’t have a security rope tied around his waist.

In this tragedy, Euridice’s – known as a character who is submissive, who does not intervene with her conditions, who directs her reaction towards herself instead of the other and who commits suicide when she cannot not take it anymore – rebellion cry is being heard and her suicide becomes an action of destruction, shake and transformation.